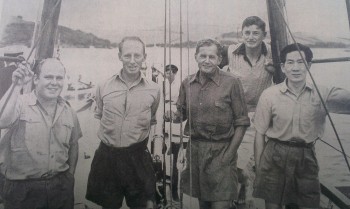 Boleh sailed for the UK on 18th January 1950. Robin’s Crew for the voyage to Salcombe, Devon was made up of 2 fellow naval officers, John Rusher and Peter Aplin, a naval shipwright, George Jarvis and Robin’s Chinese cook Chang.