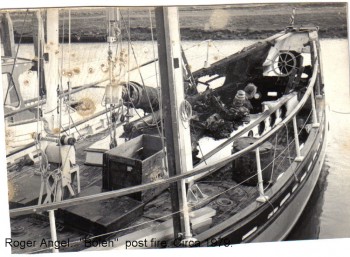 In the early hours of 22nd January 1978, as Boleh was completing a refit in Rye, West Sussex, prior to sailing for Germany and the USA, a milkman spotted a fire on board her. As a result of the arson attack, she was destroyed as far down as the waterline, with the damage so severe, that Boleh was declared an insurance write off.