Matthew Slater is to undertake a research project into the resistance and propulsion, and stability of Boleh, for his individual project. When she was built, Boleh was fitted with a unique inboard/outboard engine mounted on the stern which drove the propeller through z-drive unit. The trust restoring Boleh have deemed this arrangement unsuitable, due to the poor performance and reliability of the original – a new engine type, power and arrangement must be found, along with suitable shafting and propellers.

Boleh had her lines taken from a model built by Commander Kilroy, and this model survives to this day. The model is of a suitable length (around six feet) for use in the university’s towing tank; therefore her resistance characteristics could be found from towing tank tests using a plug taken from the original model. The results of this test could be used to select and propose a power plant for the vessel.

As originally built, Boleh was fitted with a single quadruped mast. The Boleh trust would like to use this masting arrangement again, with the original masts, if possible. As a new drive and internal arrangement is to be fitted (e.g. a different placement of water and fuel tanks), a study of her stability will be required. A professional study will be undertaken by a qualified naval architect, but a simultaneous study will be carried out by the Matthew as part of this project. Boleh Project’s naval architect, Mr Graham Westbrook of Westbrook Marine, is to oversee the analytical work on Boleh.

Matthew Slater and Jonathan Happs, supervised by Professor Wilson, will undertake two reports, comprising this proposal and another by Mr Happs into her rig, and for the results to be used in the final design by Mr Westbrook if suitable and practical. 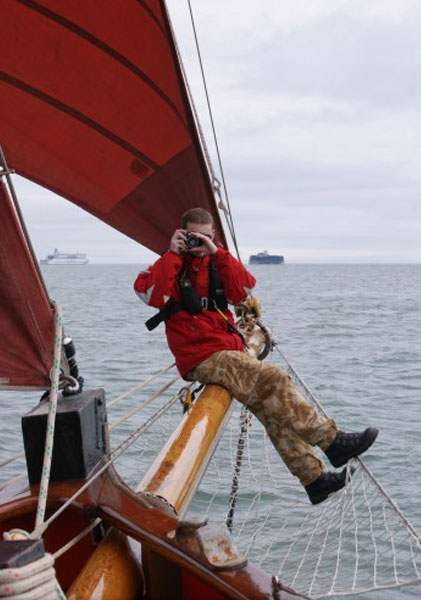 In summary, this is a one-off project in a specialist area that I am very enthusiastic about – historic and unusual vessels, that could provide valuable practical experience to my chosen line of specialisation.

Want to get involved and Volunteer?

From Skippers to Open Day Stewards, there are lots of ways to get involved – we would love to hear from you!

The Junk Yacht Boleh, currently undergoing restoration, has been subjected to a series of tests and analyses to help guide renovation work leading up to her relaunch.

Under examination were her hydrodynamic resistance characteristics in calm and moderate sea conditions, and her statistical stability. A series of towing tank tests and computational fluid dynamics (CFD) simulations were used to analyse the former, while the latter was assessed using computer software. Tank testing and stability assessment aspects were completed successfully, while the CFD element was incomplete at the time of publication.

It was concluded that the tank tests predicted the vessel’s power requirements significantly lower than reality, that she was stable, and that the CFD model would yield useful results with a limited amount of further work.