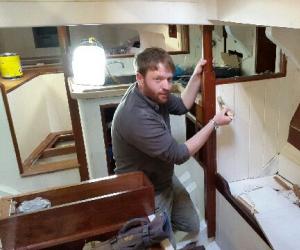 Jason Rankin, our very first Apprentice, helped strip out Boleh under Shipwright Richard Uttley’s tutelage in 2008 when the junk yacht first arrived in Portsmouth for restoration.

Now Jason, who is employed as a shipwright by Tim Gilmore at Birdham Pool where Boleh’s mast and spars are being assembled, is back at the weekends helping to complete the Project. Picture shows Jason putting the finishing touches to the forward end of the Saloon.