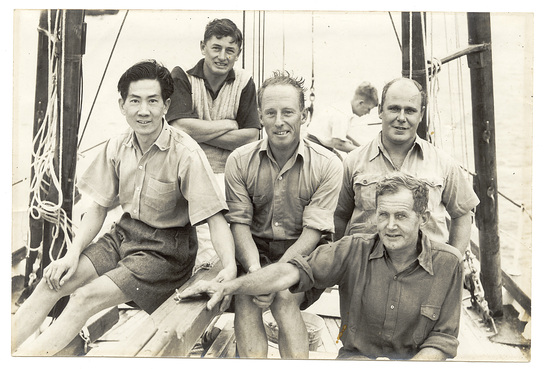 On Friday 1st September 1950 at 16.10, Boleh dropped anchor off the Ferry Steps in Salcombe to a 3 gun salute from the Yacht Club and ‘a tremendous welcome from the Mayor, townspeople and summer visitors’.  Her crew, ‘weary but triumphant’, had completed an epic 12,000 mile voyage from Singapore and were featured in the next day’s national press.

70 years on, Boleh was unfortunately unable to visit Salcombe to celebrate her Anniversary.  However, like so many other events this year, her visit and celebrations have been postponed until next year.  Picture taken on arrival shows Boleh’s Skipper and designer Robin Kilroy (bottom right) with crew (from left to right) Chang Hai Kun, Peter Aplin, John Rusher and George Jarvis.